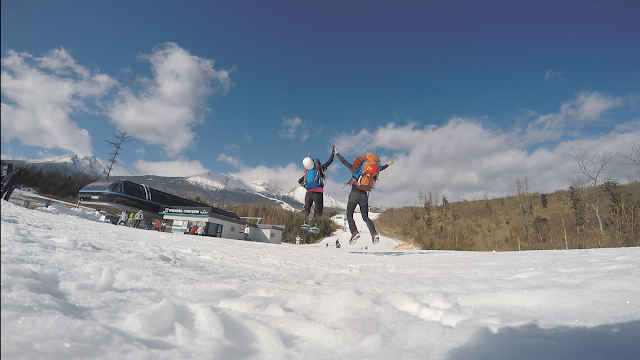 Of course, not alone, but his team members are: 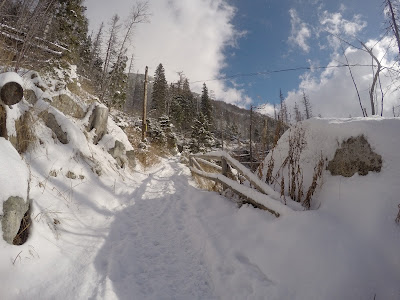 Well, what’s going on here? Why so much spam? So much chaos and so many words? When lounging around Tatras I have found new readers (hearers are hearing, anyone commanded, listeners are listening, not telling anybody anything .... you just read J

As many of you know, I am definitely not any hard rock-climber, runner or t.o.u.r.i.s.t..... there is only one thing that I am good enough in – I can say with respect – and it’s paragliding. Good enough means that even more could be done, but you know, you either have pennies but do not have the time, or you have the time but the pennies are very deep in your wallet. That's my case. But when you really want and train, everything is possible, perhaps if I would work harder, some results will come. Everything can happen, you just need to want and do your best for it. A few days ago, it came to light that what I've gambled on, what I convinced myself that way that leads in this world, through the Pyrenees. This will be our ring in pure sporting competition.

Back to the point.  I moved further into the so-called hike & fly level, so adventure plus tourism multiplied by flying two times. There has been written a lot about it, thus I'd rather quote Zdeno Vacke:

"Paragliding has had in the world for more than 30 years of tradition and like any other sport it is developing in different directions. Someone likes long flights so he is able to travel through half of the world to try them, e.g. go to fly to South Africa, Brazil or Kenya that there flew 400 kilometers or more during a single flight. Another one is looking for an ultra lightweight equipment which allows to climb any hill by walk and quietly tumble into the valley. Flying long flights so-called "cross country" like any other soaring sports is based on a combination of an appropriate weather conditions and pilot's skills enabling glider such as the parachute wing, stay as long as possible in the air and fly over different distances. This requirement corresponds to the equipment which represents "high end" in the development of aerodynamics. On the contrary, mountain flying or so-called "Hike and Fly" trend is a representative of minimalism. Seats of a weight up to 400 grams, parachutes weighing up to 4 kg and other ultralight equipment parts enable pilot to become nearly outdoor runner moving the country at the same speed as if he doesn’t carry back the flying equipment. What is, however, the advantage of both approaches in combination, it says the trend in extreme races such as the relatively well-known X-Alps and relatively new X-Pyr.

Relatively simple idea, which is common for all outdoor sports, so to get from point A to point B by using some of the sports tools, is the basis of this competition. Those funds are your legs, the device is a parachute and place the mountains, respectively the whole massifs such as the Alps from east to west, and the Pyrenees from west to east. By foot the big odyssey for runners of KILIÁNOVÁ format, for skiers maybe something for Bonatti’s nature, but a combination of air and ground challenge for every skilled pilot. And it should be added that this is clearly the most effective way of movement in the mountains, because pilots can fly over 200 km in a single day not only in the Alps. From the classic "bivouvac fly" when a pilot carries the necessary equipment for solitary stay in the nature, a competitor takes what is strictly necessary such as the parachute, seat, appliances, reserve parachute, helmet and backpack. Weight of the set is due to special materials reduced to 8 kg and it is quite possible and run with it. The rest stuff is managed by "suporter", the second team member, which moves the car and carries food and accommodation for the pilot. However, he must not help him to carry cargo, or to give him a lift or otherwise to facilitate his movement to the target. In addition to the time and material consumption, it is very difficult not to be nominated to such a race because there are no clear eligibility rules. Thus, it is an adventure race with everything as it is.“

So the first step to my imaginary sports Valhalla would be completed. But to be chosen does not mean automatic success. For me, this means that in six months I have to be perfect, any hill can’t be any problem, any distance, and any non-flying weather. So hurry into the mountains up to sweat, freeze, fear ...

Therefore, preparation must be versatile, while striving to reach serious air kilometers, it would be better to have hydraulic instead of legs. So heavy backpacks, boots, hoes and others, it would be good to have too little oxygen as well. Along with teammate Marek we are carrying for a couple of weekends. This Friday, Saturday, he is not available but it does not change things much. Only that I will not be a super climber, but just a walker. At least I can take a pretty heavy “hátyžák“ (as my grandma the old bag used to call). 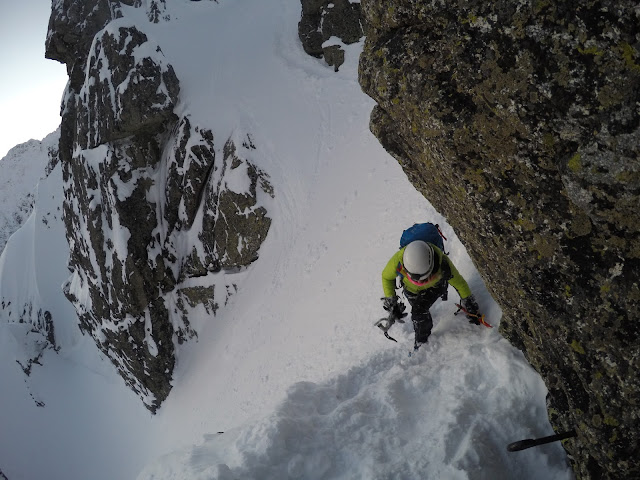 I take with me a sister of the "most senior" (PhD student, how should I name him), fresh member of our university mountaineering club Slavia. I planned to carry some kilograms, the girl would walk in the winter little bit while a few drops of sweat dropping down which means a nice weekend just happened. 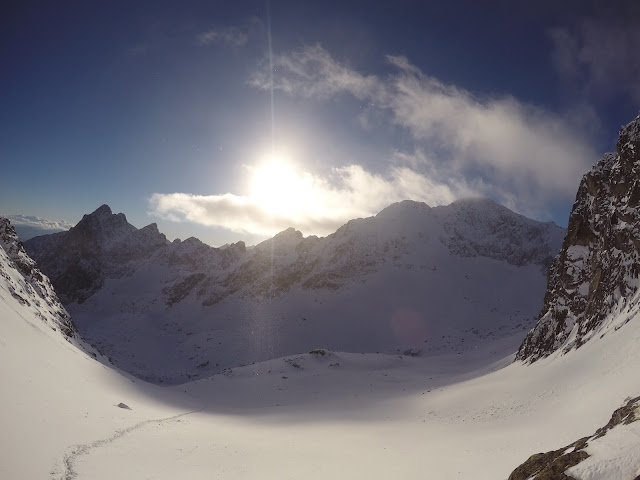 It seems that it hangs over us a bad constellation of stars. Train is late one hour in Vrútky already. At stationon the way they announced through the intercom that a nurse is needed as some troublemaker injured his head. Poprad shows on the board half past nine. Today's plan to Tery cottage and Baranie rohy will be difficult to catch until the dark. In Smokovec we went for acidulous water and together with the guys from telecommunications we are moving to Hrebienok. Very great damage would be to destroy the shoes on asphalt, we saved a good three quarters of an hour. Beautifully snowy Lomnicky peak which proudly clouds blown away from his face, welcomes us back ... "at home" (Messner said something like my home is where my kids are. My home is where I feel good. Under the clouds, in the hills, on them or under them!)

We are meeting Jozo Kubáni in front of Teryna and he haunts us because of avalanches. While it is number two, and number two means the most disasters, as it is only 'moderate' risk. If we do not like it, no problem, we will turn around. We will eat the big portion of the cabbage soup at the mountain hut let’s go in the footsteps to Rohy. A tree frog (it’s me) argues that until we get on the top, the peak will not be covered by clouds. Although the snow is more than a lot, powder snow, and firn is laying under it, but it does not tend to be kind of lapsing. You can see some of those snowy sheets ... 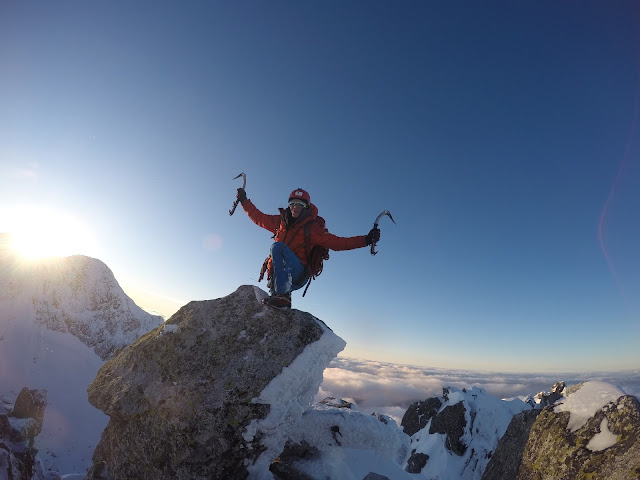 I'm taking one of the borrowed ice axe, and the other one badly fixed was leaving away from the “hátyžák“ (backpack) to the snow, while we have not noticed it until it was too late. We have reached the top in the best moment. It is four p.m. and five minutes after us the Sun goes down behind Ľadový peak. 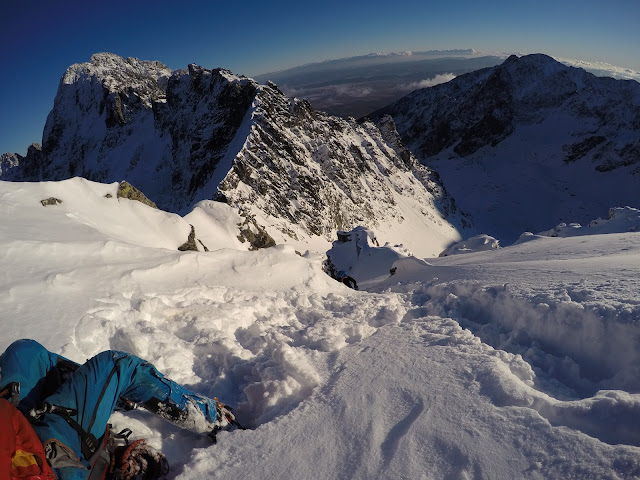 I will spend some attention to these views, because – o shit - it is so pompous. We are above the clouds, high, so high. Golden hour with long shadows models already spectacularly sculpted Tatras. No matter how many times I stand here, but it's always something different, something new, something awesome. As icing on the cake it is shown swirling snow from Ľadový štít, but it is too far to make a picture and to be honest, such a view I selfishly keep to myself only :) 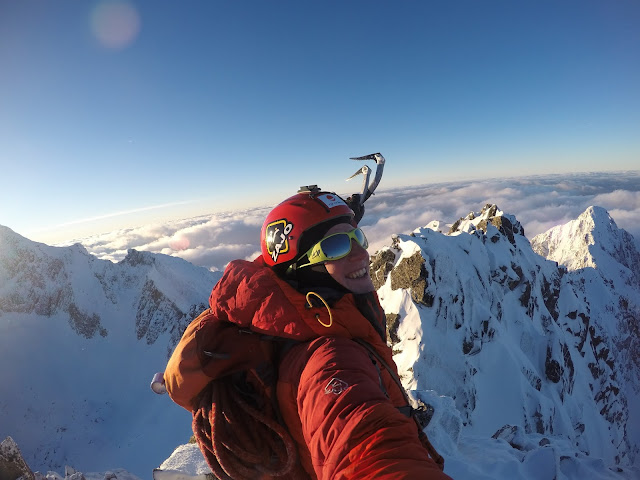 I fill in quickly some kilojoule in the form of peanuts and “harula” (potato pancake), and it feels really good. A little bit frozen we can go down once Helios went behind peaks, truly, it is getting cold, fortunately that I have “páperôčka” (anorak) of Zajo brand. We come to the mountain hut safely before full dark. People from the hut will not leave us hungry, we eat some goulash and we are happy. Red cheeks, frosted hands. It is very comfortable to sit in the cottage with full stomach. 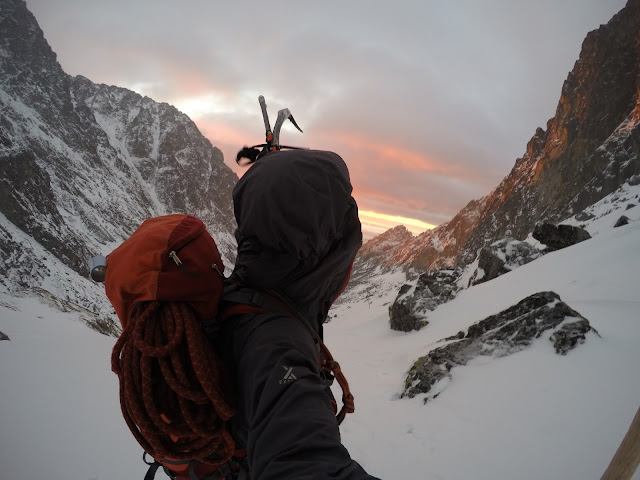 In the morning we get up at half past five as we want to get to Lomničák. Pedestrian terrain using of course. Through filmmaking drain into the saddle of Lomnický and there it will be clear whether we will go to the top or not. First, because of the weather, and than because of the condition of my sparing partner or level of snow. Since it's been on Baranie a lot and windy as well, it can be really hard in the drain. 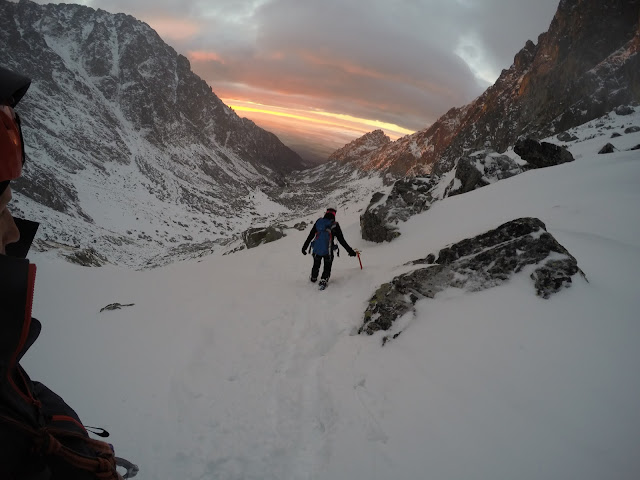 After a bit chaotic breakfast we go down to the start and let’s go to the top again. Sunrise between two layers of cloud. Fog in the valley and cumulus at about 2100 meters. Red is all around me thus I'm so excited. Even more the rocks are affected by the fire colours of clouds. All it takes only a short time, perhaps five minutes and it's gone .... Another of the experiences that I will remember to grove. 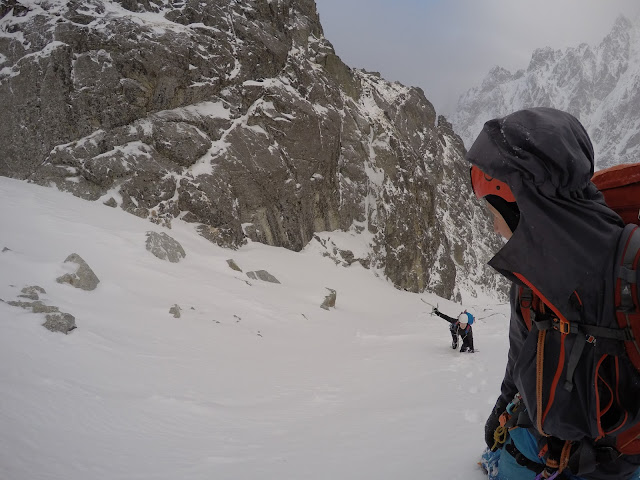 There is a lot of snow in the lee of the rocks. I am moving zigzag on the rocks, grass and select the smallest mud. Not to let something start unnecessary. But everything keeps beautiful.

In the saddle we twisted back, in the morning the clouds did not move by more than 100-200 meters, so we will see probably a great white nothing. Moreover, a girl is getting tired, so let to keep it for the next time. 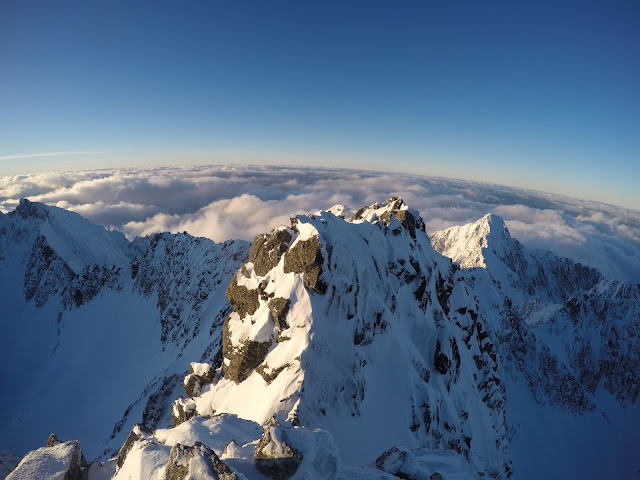 Trough ski slope down to Lomnice on track to Poprad. Perfect! Train is coming within an hour, so we take a pleasure in the view
of the greens. I wish to be here again soon. Not by coincidence, but along (also) from Baranie rohy, we went to shambles,
and tried black pudding (jaterničky). Oh, truly nothing wrong to me before but I´am better now! 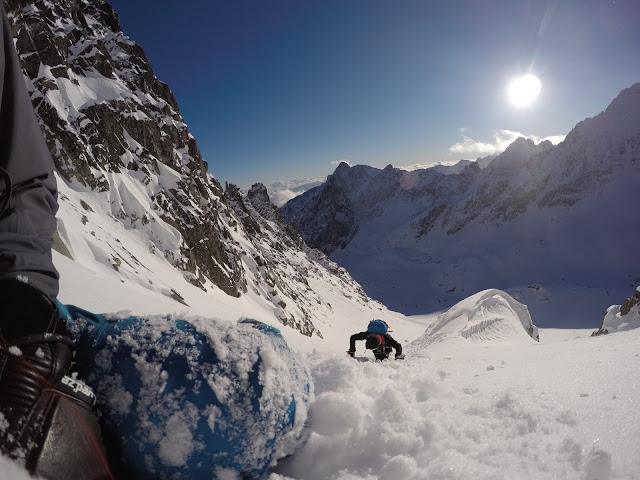 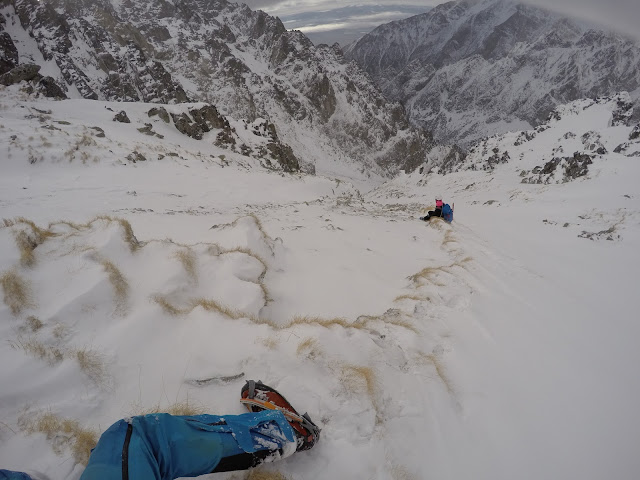 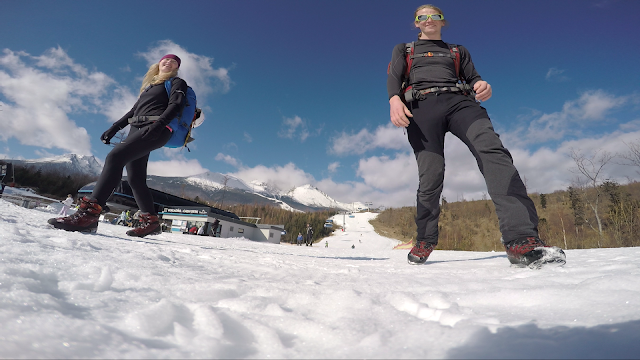 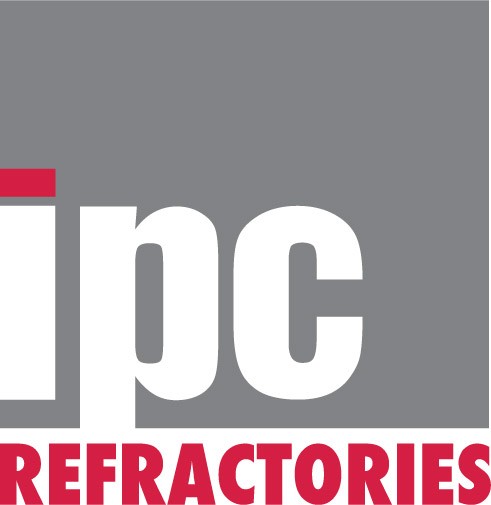 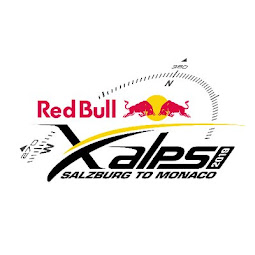